The Alster is an inland body of water in the centre of Hamburg, consisting of the Inner Alster and the Outer Alster. The two lakes are very popular, also for boat tours. Boat tours on the Alster are offered several times a day all year round. There are simple tours on the Inner Alster and Outer Alster (duration approx. 1 hour). There are also longer tours by boat, for example including some of the canals leading off the Alster.

Jungfernstieg is on the banks of the Inner Alster. The promenade is the centre of Hamburg for many people. This is also where the passenger ships leave for the round trips on the Alster. A large underground station with suburban railway called “”Jungfernstieg”” is very close to the piers of the boat tours on the Alster. 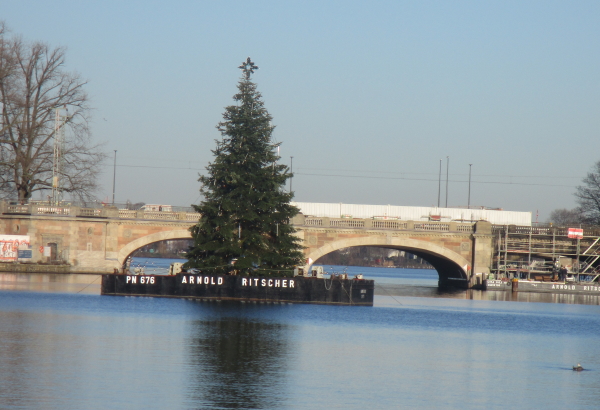 The smaller lake is Binnenalster. The 60-metre-high fountain is well-known and operates from around March to October (see picture at the top). In December there is a Christmas tree in the middle of the Binnenalster. 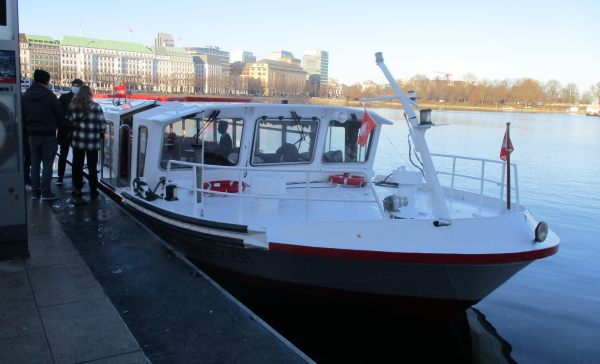 You can hardly miss the boats when you are on Jungfernstieg. Usually there are several large boats in a row over a length of more than 100 metres.

You pass many famous buildings on a boat trip around the two Alster lakes. Since the boat tour starts in the centre of Hamburg, it is almost like a city tour by boat. Well-known on the shore is the Hotel Vier Jahreszeiten, the most famous hotel in Hamburg on the Inner Alster. The Hotel Atlantic on the Outer Alster is hardly less famous. This is where the musician Udo Lindenberg has been staying for over 20 years.

Alster round trip: online tickets, travel times, operating times and so on.

The classic round trip on the Alster starts at Jungfernstieg on the Binnenalster. You always travel along the shore, through the bridge into the Outer Alster. You sail around the large Outer Alster near the shore and then return to the Inner Alster at the jetty. Duration of the round trip: About 1 hour.

In winter, there are about one trip per day, in summer considerably more. A ticket costs 16.50 euros for adults in 2022. Children up to the age of 16 can book the boat tour on the Alster in Hamburg for 8.50 euros.

The majority of tourists book the round trip along the banks of the two Alster lakes (see above). However, there are also other tickets for boat tours on the Alster in Hamburg:

Canal trip Alster: Here you travel on small canals leading off from the Outer Alster. The trip takes you through green countryside with villas, parks and gardens. Also interesting.

These special trips usually do not take place all year round, usually not in winter. We recommend the Alster tour described above along the banks of the Binnenalster and Ausseralster.