Dusseldorf (German Düsseldorf) is not part of the Ruhr area, but it is only about 30 km from the western part of the Revier. It is an interesting city with a lot to see. For tourists to the Ruhr area, Dusseldorf is ideal for an excursion. Many of the most important sights are in Dusseldorf’s famous old town and thus within walking distance of the main railway station. 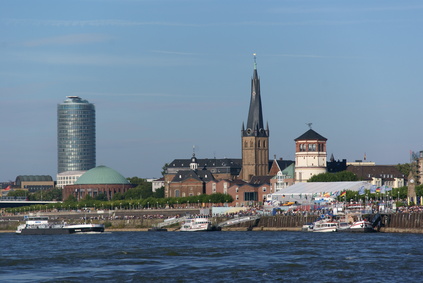 Dusseldorf is located directly on the Rhine on both sides of the river. The city centre is on the western (left) bank of the Rhine. The famous old town directly on the river bank, the town hall is only about 100 metres from the river. Düsseldorf’s Old Town is probably the city’s most famous attraction – the pub district with over 200 pubs. At least since the Toten Hosen say “we have the longest bar in the world in Düsseldorf”, millions of people from all over Germany have wanted to party once in Düsseldorf’s old town. Many come again and again and regularly – hardly anywhere in the republic is as busy as in the pub district in the old town. Many talk about Ballermann in the Rhineland.

Düsseldorf is the capital of NRW and a rich city. For one thing, Düsseldorf is a shopping city with many shops, especially for wealthy customers. Quite a few rich Arabs and Russians fly to Düsseldorf for shopping. The fashion industry and the advertising industry are other very important economic sectors in Düsseldorf. Although only a few kilometres from the Ruhr area, Dusseldorf feels more like Munich or Milan than Duisburg or Dortmund.

There is an enormous rivalry between Cologne and Dusseldorf. The people of Düsseldorf don’t like the people of Cologne and vice versa. This is largely fun and has a lot to do with carnival, but it can also be serious. The Dusseldorfers have fewer problems with the Ruhr area, but many people from the Pott also regard the Düsseldorfers as arrogant and pretentious. However, if you are in the pubs in Düsseldorf’s old town, you quickly realise that this is not the case: there is probably no other place in Germany where you come into contact with people as quickly as in Dusseldorf’s old town.

Dusseldorf has a lot to offer in terms of sights. The old town, the media harbour and the Königsallee are not to be missed. Düsseldorf’s old town not only has pubs, but also many old buildings, great churches and museums. Since the demise of Kurfürstendamm in Berlin, Königsallee is probably the most important and best-known shopping street in Germany. The Medienhafen is a district in the city centre that has been completely rebuilt in recent years with very interesting hyper-modern architecture.