Dusseldorf’s Altstadt is probably the most famous party district in Germany after St Pauli’s Reeperbahn in Hamburg. There are almost 300 pubs here, many of them Altbier pubs. When the Toten Hosen referred to the “longest bar in the world”, they meant Düsseldorf’s old town as a whole. The punk band contributed significantly to the popularity of the area. Every weekend, throughout the carnival season, there is a “Ballermann atmosphere” in Düsseldorf’s party mile. But also during the week, even in winter, there is always something going on here.

The centre of Dusseldorf’s pubs is behind the town hall, for example in Bolkerstraße and the streets and alleys around it. You can go to a pub here alone without any problems. If you stand at a bar, you can quickly strike up a conversation. The people of Düsseldorf are very open to strangers, and a sense of community quickly develops. Almost everyone drinks the famous Alt beer from the 0.2-litre glasses. The locals often and quickly buy strangers and tourists a round. One should return the favour. If you want, you can also order something without alcohol without any problems.

Probably the most important pubs in Dusseldorf’s old town are the breweries. They are the central meeting point and are often well frequented in the morning. Central to Bolkerstrasse is the brewery “Zum Schlüssel” (see picture below) with home-brewed Altbier and good Rhineland cuisine. As in many pubs in the old town, you don’t necessarily have to eat something, you can also just have a beer or something else. You can find information about the typical dishes in Düsseldorf on this page. 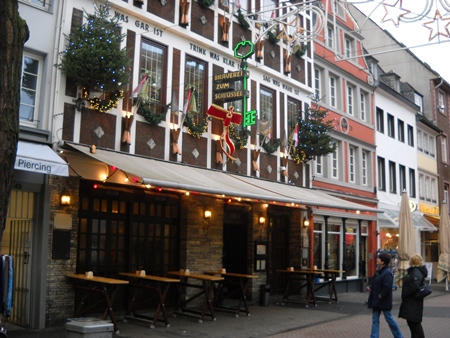 In the same street is the recommendable brewery “Im Kessel”. Another very well-known brewery is called “Im Füchschen” and is three streets further north (Ratinger Straße). Here you can get great, typical local sausage and meat dishes at medium prices from their own butchery. The best-known brewery, however, is “Zum Uerige” south of the town hall. Zum Uerige” serves simple dishes, but is more of a drinking establishment and is almost always crowded at weekends.

Perhaps the best-known pub among the many is “D’Spiegel”. There is often live music from 10 pm onwards (in Bolkerstraße, picture below). 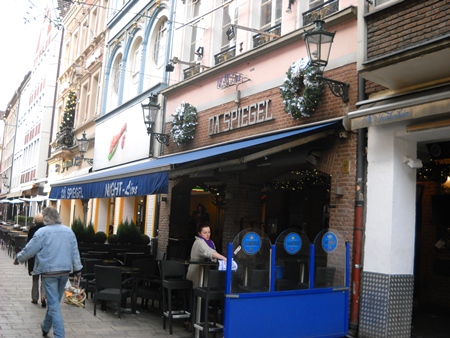 If you have a little more money and want to spend it, you can dine excellently at the wine house “Tante Anna”: good wine list, in a former chapel, on Andreasstraße in the middle of the pub district. Not far away is the inexpensive traditional restaurant “Qüche” (easy to remember name with imaginative spelling!). Here you’ll mainly find simpler dishes such as the famous Düsseldorf soups.

Smoking is not only banned in restaurants in Dusseldorf. Smoking is now also banned in pubs in NRW. If you want to follow in the footsteps of the legendary band “Toten Hosen”, you should go to the “Stone” club in Ratinger Straße. Here, in the “Ratinger Hof”, in the middle of the pub district of the old town, were the beginnings of Germany’s most famous punk rock band. Today, the Stone again hosts good rock parties and many live concerts.