Pforzheim is a city at the northern end of the Black Forest. After Karlsruhe and Freiburg, Pforzheim is the third largest city in and around the Black Forest. Pforzheim hardly has an old town as a sight to see, but it does have a few other things to offer. The city of the jewellery and clock industry has several interesting museums. The wildlife park, a kind of animal park with free admission, is also interesting, especially for holidaymakers with children. The Black Forest begins at the city limits of Pforzheim.

Pforzheim is a large city with about 120,000 inhabitants. Karlsruhe is only about 25 km away. A suburban railway runs between the two cities. Stuttgart is about 40 km away. Pforzheim is not a bad choice as a base for a holiday, especially if you want to visit the Black Forest as well as the cities mentioned above. Baden-Baden and Rastatt are also within reach for a day trip by train, S-Bahn or car. Hotels in Pforzheim are also somewhat cheaper than in Baden-Baden, for example.

Three smaller rivers flow together in the gold town of Pforzheim, the Enz, the Nagold and the Würm. Three well-known Black Forest high trails start in Pforzheim at the Kupferhammer in the south of the city at the confluence of the Nagold and Würm rivers.

In my opinion, the most important sights in Pforzheim are the Wildpark and the Schmuckmuseum. I have written a separate page about both: Wildpark Pforzheim and Schmuckmuseum Pforzheim. You should also visit the Pforzheim Technical Museum, which deals with jewellery and watch-making machines, and the Pforzheim Gallery. Both are housed in the same building in the south of the city centre.

The centre of Pforzheim is about 200 metres south of the main railway station. It is a typical German city centre with the usual department stores, chain shops and fast food outlets. A modern shopping centre was also built a few years ago (the Schlössle-Galerie, see picture). 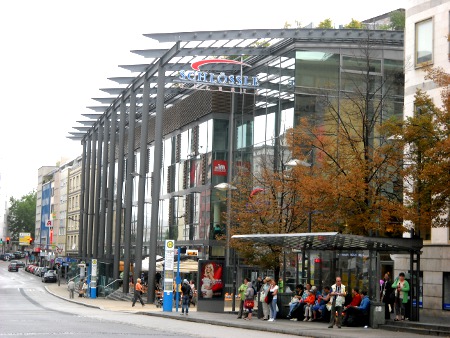 The former old town of Pforzheim was almost completely destroyed in an air raid in February 1945 and has not been rebuilt. There are some interesting monuments and sculptures in Pforzheim. I like the Rassler monument in the city centre best. It shows four people from the 19th century walking from a suburb to Pforzheim to work in a clock factory.

Museums in Pforzheim: A little further south are two good museums: the Technical Museum and the Pforzheim Jewellery Museum, the only museum I know of that is dedicated to the history of jewellery and jewellery making. The Technical Museum also exhibits jewellery-making machines (free admission). Outside the city, near the Wildpark, there is also the DDR Museum, a collection of objects from the former GDR.

Getting to Pforzheim: The city lies on the main railway line from Stuttgart to Karlsruhe. Pforzheim is also connected to the Karlsruhe S-Bahn network, for which day tickets and the like are available. Buses run through the city, but Pforzheim does not have a tram.