The Panoptikum Wax Museum is an exhibition of wax figures in Hamburg on the Reeperbahn. The wax museum is very popular, most visitors are enthusiastic. For only a few euros admission, you get to see dozens of celebrities in normal life size, including Donald Trump, Chancellor Merkel, athletes, actors, show stars and many more. The Panoptikum Hamburg is a great attraction in St. Pauli. It was the first wax museum in Germany.

The crowds are huge, often long queues at the museum with the wax figures. You should buy your tickets online beforehand:  Tickets are available at this link

The museum consists of 4 floors. The wax figures are set up on all floors. The photos you can take are great. You stand next to the wax celebrities and have a real-looking photo with yourself and the celebrity. You can stay in the Panoptikum Wax Museum as long as you like and take unlimited photos. 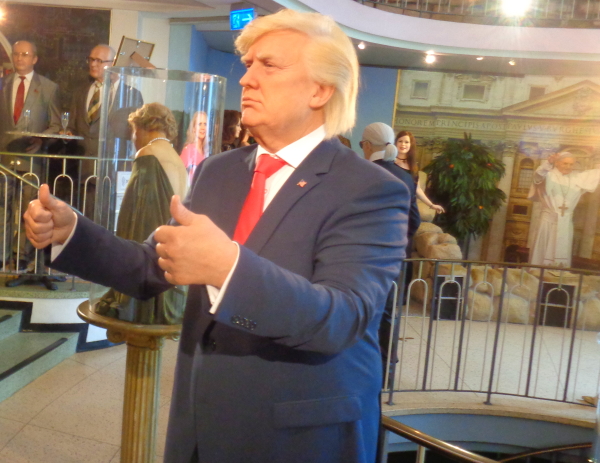 The wax figure of Donald Trump is currently one of the most popular people in the cabinet. The thumbs up is a famous gesture of the controversial US president. Standing just a few metres away is Angela Merkel. Most of the former German chancellors such as Kohl, Schröder, Brandt and Adenauer are also on display in the Panoptikum Wax Museum Hamburg. Legendary is the figure of Helmut Schmidt, sitting with a cigarette in his hand and a packet of lighters on a table in front of him.

Another famous Hamburger in the waxworks on the Reeperbahn in St Pauli is the footballer Uwe Seeler. In total, there are about 120 celebrities as wax figures. Among them are the Queen of England, Karl Lagerfeld, Otto Wallkes, Barbara Schöneberger, Martin Luther, Hitler, Stalin, Churchhill, Honecker and many more. We also liked Michael Jackson, Marilyn Monroe, Charlie Chaplin, James Dean, Harry Potter with an owl, Herbert Grönemeyer, Obama, Lady Di and Thomas Gottschalk, among others.

The crowds are huge, often long queues at the waxworks exhibition. You should buy your tickets online beforehand: Tickets are available at this link

Many of the figures also have a connection to Hamburg. These include the 4 Beatles, who had their first concert a few hundred metres from the wax museum in St Pauli (John Lennon, Paul McCartney, George Harrison and Ringo Starr). The musician Udo Lindenberg also belongs to this group. Hans Albers and Freddy Quinn are also part of the exhibition.

Everything is beautifully done. You’re not allowed to touch the wax figures, but you can take photos and videos as you like. The wax celebrities often stand in the middle of the room and you can look at them from all sides. It’s really great, especially if you’ve never been to a wax museum before.

Such waxworks usually cost a lot of admission. The Panoptikum wax museum in Hamburg St Pauli is much cheaper than most other wax museums.

Tickets should be bought in advance on the Internet. The access is limited. After the Corona reopening, tickets cost only 6.90 for adults, children even pay only 5 euros.

The Panoptikum Wax Museum on the Reeperbahn in Hamburg is open daily from 10 am to 8 pm.

Parking is possible in the area, but charges apply (public car parks and multi-storey car parks).

The nearest underground station is “St. Pauli“, the nearest S-Bahn station is “Reeperbahn”. Both stations are 200 to 300 metres from the Wax Museum Hamburg.

The rush is great, often long queues at the Panoptikum. You should buy your tickets online beforehand: Tickets are available at this link