The Old Elbe Tunnel Hamburg, a popular attraction for tourists

For over 100 years, since 1911 to be precise, there has been a tunnel under the Elbe between St Pauli and Steinwerder. The Old Elbe Tunnel is over 400 metres long, the Elbe is wide in Hamburg. Today, the long subway is mainly used by pedestrians and cyclists, but it is also a well-known tourist attraction. The use of the tunnel is free of charge. 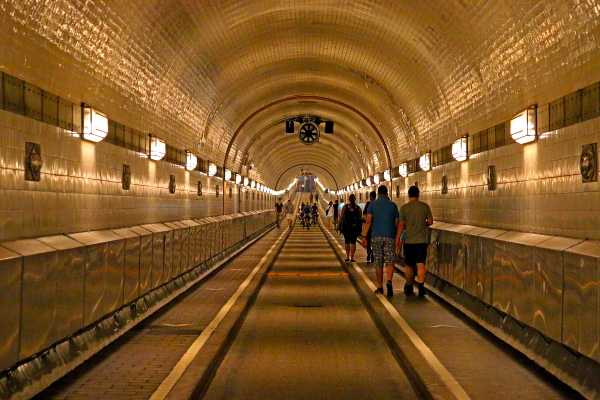 The tunnel consists of two tubes. One tunnel tube has been renovated in recent years and has now reopened in new splendour. Now the other tunnel is closed and will be renovated until around 2026. Since the start of the renovation, the Elbe Tunnel has only been open to pedestrians, cyclists, electric scooters and the like. In the past, it was also possible to drive through the Old Elbe Tunnel by car. This is currently not possible because of the renovation. Cars also had to use lifts to go down and up.

The Old Elbe Tunnel used to be called simply Elbe Tunnel. Since a new tunnel was opened under the Elbe in Hamburg in 1975, today’s tourist attraction is called Alter Elbtunnel, sometimes you also hear St Pauli Elbtunnel.

The Old Elbe Tunnel used to be called simply Elbe Tunnel. Since a new tunnel was opened under the Elbe in Hamburg in 1975, today’s tourist attraction is called Alter Elbtunnel, sometimes you also hear St Pauli Elbtunnel.

The entrance is directly behind the famous Landungsbrücken St Pauli. It is easy to get here by S-Bahn or U-Bahn (S1, S2, S3, U3 stop Landungsbrücken). You take one of the lifts far down into the depths. You walk through the tunnel for about 10 minutes (length Elbtunnel 426 metres). On the other side, you take the lift back up. If you are a bit sporty, you can also go down and up stairs on both sides (about 130 steps each, depth of the Old Elbe Tunnel just under 25 metres). Between 1959 and 1991 there were also escalators in the Old Elbe Tunnel.

At the exit on the south side there is a signpost to the View Point about 100 metres away. Here you have a wonderful view of the Elbe with its many ships. You can see the modern Elbphilharmonie a few hundred metres upstream. But above all, you have a great view of Hamburg’s city centre on the other side of the river Elbe. On a map on the bank of the Elbe, you can see the important buildings that you can see from here.

Next to the lookout point there is a kiosk called “Brücke 10 am Alten Elbtunnel”. Fish sandwiches, bockwurst, drinks and so on are sold here. 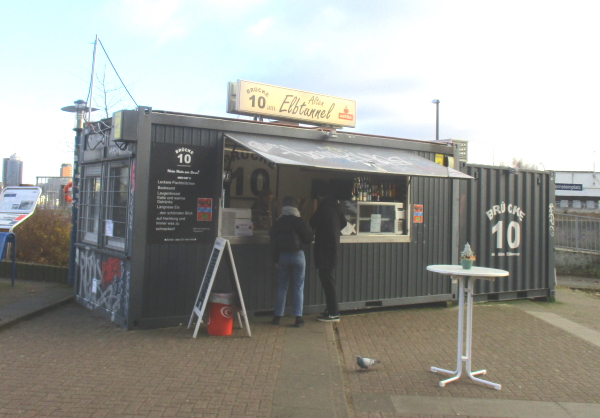 Most tourists then walk back through the tunnel to the Landungsbrucken to St Pauli. Use of the Old Elbe Tunnel is free of charge. Tourists love the river subway.

There are about six lifts on both sides of the Old Elbe Tunnel. Some are big for cars, others are passenger lifts. Since the closure to cars, not all lifts are in operation as far as we know. Some large lifts can carry 10 tonnes. 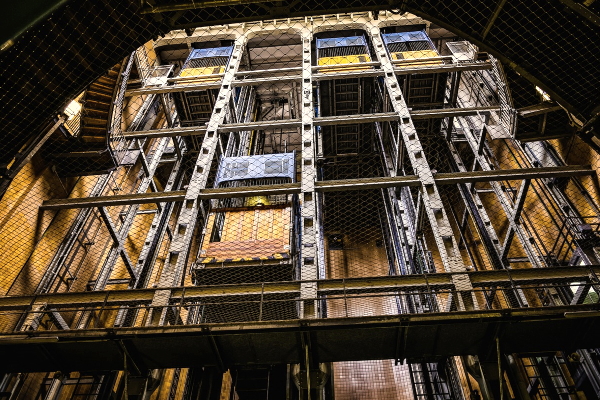 The construction of the Elbe Tunnel over 100 years ago was a technical masterpiece. It was the first such structure in the whole of Europe. More than 4,000 workers built the Elbe tunnel under the Elbe for several years. At that time, the subway was important for the many dockers and shipyard workers who worked on the other side. Many large shipyards were on the other side of the Elbe in Steinwerder. To this day, the structure fascinates people. We recommend all visitors to Hamburg to walk through the tube. It’s a great sight to see for free. The tunnel structure has been a listed building for several years,

One tunnel tube was renovated in 2019, the other tube of the Elbe Tunnel will now be renovated until 2026. Unfortunately, we don’t know whether the legendary car rides with lift through the Old Elbe Tunnel will be possible again after that.