The German Mining Museum in Bochum is the most interesting and largest museum in the Ruhr region. Highlights include a visit to a large mine with 2.5 km of tunnels beneath the museum and a trip up a winding tower over 70 metres high. 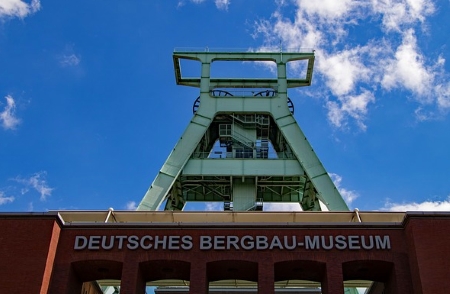 The Mining Museum in Bochum is the largest museum on mining in the world. The exhibition covers three floors with about 20 halls. In addition to the technical equipment (the large machines in the cellar, for example, are well worth seeing), the exhibition also focuses on the social and economic aspects of mining in the Ruhr region and other parts of the world. Thus, on the one hand, the importance of coal for industrialisation is presented – on the other hand, however, the hard and dangerous life of the miners and the social consequences of the decline of coal mining in the Ruhr area are also shown.

For almost every visitor, the highlight is the exhibition mine. A pull-out takes you about 20 metres underground. A total of 2.5 kilometres of galleries are freely accessible. Former machines and tools are on display at many points in the mine, and their functions are explained on audio tapes.

After visiting the mine, visitors can take the lift up to the winding tower at a height of about 60 metres. From up here, with good visibility, you have a view of the entire central Ruhr region. In bad weather, it is sometimes not possible to go up the tower.

The German Mining Museum has the following opening hours: Tuesday to Friday from 8:30 am to 5 pm. On weekends (Saturday, Sunday, public holiday) the opening hours are from 10 am to 5 pm: Monday is closed. You should not arrive too late, as you can only go down into the mine until 15:30 (mine tour). On some public holidays, such as Christmas and New Year, the mining museum is closed.

The mine is very interesting. There is also a great rope ride simulator. It simulates a lift going down 1200 metres. Afterwards, you can look around the huge mine and stay as long as you like. At the end of the tour of the coal mine, a lift takes visitors directly up to the old winding tower. From the top you have a great view of Bochum and the Ruhr region from above, similar to a high church tower.

Despite the renovation, we think it is still worth visiting the mining museum, especially because of the exhibition mine.

There is a restaurant and a cafeteria in the mining museum. The prices and the food are OK. The cafeteria serves reasonably priced meals.

On foot from the city centre in 10 to 20 minutes. Otherwise by underground line 35 two stops north of the main station.

– the huge DASA museum in Dortmund, only a few kilometres away

– the former mine and UNESCO World Heritage Site Zollverein in Essen, an open-air mining museum

Some of the information on this page is from 2022, others are much older.