Snakes are always a topic of interest in guidebooks. In the Black Forest, the topic is particularly interesting. In the whole of Germany there is only one poisonous snake, the adder. Only in a small region in the Black Forest does a second venomous snake live in Germany. 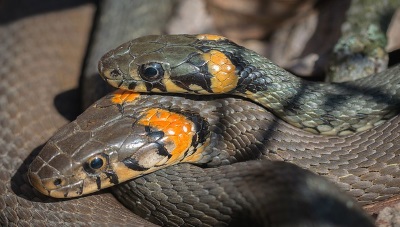 How dangerous are poisonous snakes?

Many holidaymakers and hikers are afraid of snakes, quite a few even have a snake phobia. Dangerous snake bites are very rare in Germany. Snakes sense people walking nearby by shaking the ground. The snakes flee or hide. In addition, the adder and the asps viper are not considered particularly aggressive. Also, both venomous snakes are rather rare in the nature of Baden-Württemberg as a whole and only occur in certain, smaller areas in the federal state and in the Black Forest. Overall, bites from snakes to humans are therefore rare in Germany.

If a snake bite does happen, you should quickly consult a doctor or dial an emergency number. Although bites from the two poisonous snakes in Baden-Württemberg are not fatal in most cases, the venom can still be dangerous. Poisons affect everyone differently, and there are people with very dangerous allergies to snake venom in particular. And who has ever been bitten by a snake of the same species and knows about a snake venom allergy? In addition to allergy sufferers, children, pregnant women and elderly or sick people are particularly at risk from snakebites.

The two venomous snakes in Baden-Württemberg

The adder is found in various regions in south-west Germany, including the Black Forest. The asps viper, on the other hand, lives only in a small area in the southern Black Forest north of the town of Lörrach not very far from the border with Switzerland.

The asps viper is a venomous snake whose large distribution area is mainly south of Germany. The snake lives, among other places, in almost the whole of Italy, in the southern half of France, in the west of Switzerland and in the north of Spain. In Germany, it is actually too cold for the reptile. Only a small population exists in two valleys in the warm Black Forest. The meadow valley north of Lörrach is best known for the asps viper. But even in this part of the Black Forest, the snakes are very rare and threatened with extinction. The asps viper is under strict protection.

Asp viper characteristics: The colours and patterns of the asp viper are very different. In general, it is not easy for laypersons to distinguish between the snake species in the Black Forest and Baden-Wurttemberg. For example, the asps viper and the adder are often confused in the Black Forest. An adult asps viper is usually between 60 cm and 90 cm long. From about October to March, the snake usually hibernates.

Poison Asp viper: Which of the two poisonous snakes is more dangerous in Baden-Wurttenberg is disputed. Presumably, the venom of the asps viper is somewhat stronger, but the adder often has a larger amount of venom available. A bite on humans by an asps viper causes severe local swelling. The nerve poison can cause serious breathing problems and cardiac arrest. There is an antiserum (“antidote”). Most of the time, bites from an asps viper are not fatal. However, in 2013 in France, a healthy man of about 50 died from an asps viper bite despite quick medical help.

The poisonous adder lives in many areas in Germany. In Baden-Württemberg, for example, it is found in the Black Forest and on the Swabian Alb. As far as we know, the venomous snake lives in the Black Forest mainly at higher altitudes. Among snakes, the adder is a cold specialist; the snake species even exists in Scandinavia and in Scotland. Overall, the adder is one of the most common snakes and reptiles in the world. In the Swabian Alb it lives in several areas, for example, larger populations of the adder are known in the district of Heidenheim. 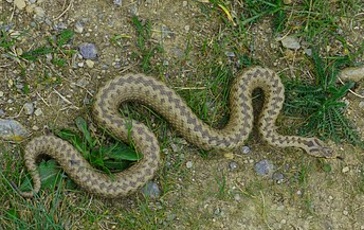 Characteristics adder: The adder is also very differently coloured. Often, but not always, the snakes have a zigzag pattern on their back. The venomous snakes can be light to black. An adder that is solid black is also called a hell adder. An adult adder is usually between 50 cm and 80 cm long.

Non-venomous snakes in the Black Forest and Baden-Württemberg

Snakes in Europe: about 40 species

Snakes in the world: about 3,700 species, so there are only 6 of 3,700 snake species in Germany. Even in Europe, snakes are not exactly species-rich compared to other continents.