The Veltins Arena is the stadium of the Bundesliga club FC Schalke 04 and was built between 1999-2001. It is one of the most modern stadiums in Europe. The roof construction and the turf that can be moved out of the stadium are the technical highlights.

In the Veltins Arena there is a small museum with exhibits from the long and successful history of the workers’ club FC Schalke 04. The greatest historical successes of the “Knappen” are shown on various screens. The museum is definitely a must for the real fan.

Even more interesting is the stadium tour (Arena Tour): You are guided through all parts of the Schalke 04 stadium for about 75 minutes. You get to see rooms that you normally never see or only see on TV: The players’ dressing rooms, the press room (bottom left), the beer tanks (over 50,000 litres in total!), the boxes, the VIP area and much more. The good-humoured and knowledgeable stadium tour guide Christian tells many exciting stories and is happy to answer any questions about the Veltins Arena. 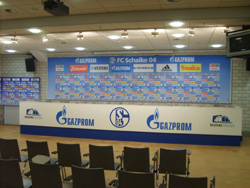 The roof construction in the arena (picture below right) is considered one of the most modern in the world. The roof can be closed completely or opened partially (about the size of the playing field). 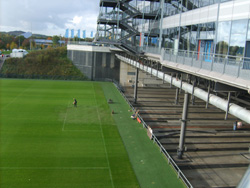 After each match, the pitch is completely moved out on rails (picture above left). Outside, the grass grows much better with wind and sun and needs to be renewed less often. In addition, other events can take place in the hall without damaging the grass. The Veltins Arena also hosts rock concerts, TV shows and other sporting events (e.g. biathlon, handball, American football). Many world-famous bands such as U2, Bruce Spingsteen and Metallica have already played in the Veltins Arena. During Bundesliga matches, the arena has a capacity of 61,500 spectators. Another interesting feature is the video cube under the roof in the middle with four 36-square-metre screens.

Schalke Museum: Opening hours daily except Monday from 10am-1pm, Sunday only until 5pm. Admission 5€ / adults and 3€ / youths under 21. The museum is in the stadium at staircase 12. It’s worth a visit.

Stadium tour: Daily except Monday 12 and 16:00 hrs. Incl. museum admission Tour price 9€. The tour is only possible with advance booking by telephone on 0209-3892900. In my opinion, the guided stadium tour is much more worthwhile than just the museum. The meeting point for the tour is the entrance to the museum.

Tickets for FC Schalke 04 home matches: It is very difficult to get tickets for Bundesliga matches and international matches, as significantly more than half of the seats are sold as season tickets. You might have the best luck with a DFB Cup match or a friendly match.

Related: This website also provides information on the Borussia Dortmund stadium and museum.